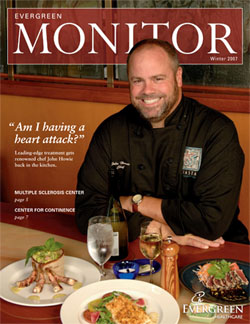 “That was not how I wanted to live my life!” Heart problems couldn’t have cropped up at a worse time for John Howie. It was the spring of 2002, and the renowned chef was just five weeks away from opening his first restaurant, the Seastar Restaurant and Raw Bar in Bellevue. “Am I having a heart attack?” he wondered.

It turns out the frightening sensation that sent Howie to the Emergency Department at Evergreen Hospital wasn’t a heart attack. Instead, doctors diagnosed atrial fibrillation, a common heart rhythm disturbance caused by abnormal electrical signals in the heart. If left untreated, it can lead to stroke.

Medication returned Howie’s heartbeat to normal that day and again a week later. After a third episode, Howie began taking the medication as a pventive measure. But the drugs have side effects, and patients sometimes have to take them several times a day. For Howie, it became a nuisance. “I was constantly having to take a larger dose to make sure I got out of the atrial fibrillation,” he explains. “That was not how I wanted to live my life!” 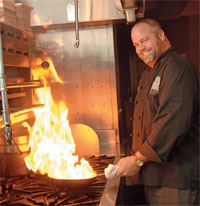 Fortunately, Howie was a prime candidate for a relatively new treatment being perfected by Dr. Derek Rodrigues of Eastside Cardiology Associates and Dr. Alan Heywood, his Sound Heart colleague. The procedure is performed at our Sound Heart partner hospital, Overlake Hospital Medical Center. “The procedure involves threading a catheter through blood vessels in the leg to the heart,” Dr. Rodrigues explains. “Then we ablate, or knock out, the areas of the heart where these abnormal electrical signals are coming from. It actually offers these patients a cure for their condition.”

It’s a cutting-edge procedure that has brought Dr. Rodrigues nationwide attention. “We’re proud of what we’ve been able to do in this area,” he says. “When we first started doing this procedure three years ago, we were among the few people in the country who did it. Now many of the doctors who do it are using the approach we developed.” Dr. Rodrigues says new treatments, including freezing therapy and high-frequency ultrasound, are on the horizon.

More than 2 million Americans have atrial fibrillation, but the ablation treatment is not for everyone. “It’s a difficult procedure and not without risk,” Dr. Rodrigues cautions. At the moment, it’s reserved for relatively young patients like Howie, who was 40 when he had his first episode of atrial fibrillation. But Dr. Rodrigues admits the surgery
can be life-changing for “active individuals who simply don’t have time for the condition, especially if it makes them operate at a sub-par level.”

A Winning Reciepe
For Chef John Howie, Dr. Rodrigues and his pioneering approach were a winning recipe. It’s been 17 months, and Howie’s atrial fibrillation hasn’t returned. He’s been off the medicine for the past six months. Today Howie’s full plate also includes being chef/owner of the highly praised SPORT restaurant and sports bar across from the Seattle Center. “It’s just a huge relief to have this atrial fibrillation gone,” he says. 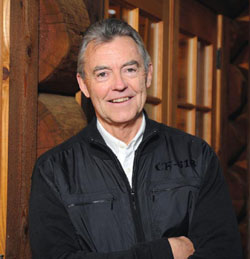 “You really have to help this man.” What would prompt a prominent Chilean cattle rancher to travel more than 7,000 miles to seek medical treatment? For Eduardo Engler, it was the search to find a cure for atrial fibrillation – a debilitating heart condition that was about to ground him.

Atrial fibrillation is a heart rhythm disturbance caused by abnormal electrical signals in the heart. The heart races; if not treated, it can lead to stroke. Engler is passionate about flying, and the condition was threatening the renewal of his pilot’s license.

Engler’s episodes began in his mid-50s. He tried all kinds of medications, but nothing seemed to help and the episodes grew more frequent. So Engler’s in-laws began researching possible surgical options in the Los Angeles area, where they lived. They also checked with national leaders such as the Mayo Clinic and Johns Hopkins.
They found that one surgeon’s name kept coming up – Dr. Derek Rodrigues of Eastside Cardiology Associates in Kirkland, Washington.

Pioneering Treatment
So Engler flew 7,000 miles to meet with Dr. Rodrigues, who, along with his Sound Heart colleague Dr. Alan Heywood, had been perfecting a surgical treatment for atrial fibrillation. It involves threading a catheter through the blood vessels in the leg up to the heart. Then Dr. Rodrigues ablates, or knocks out, the areas of the heart where the abnormal electrical signals are coming from. The procedure is performed at our Sound Heart partner hospital, Overlake
Hospital Medical Center. “It’s a challenging procedure to do well, and not without risk,” he cautions, “but it can be life-changing for those active individuals who simply don’t want to live at a subpar level.” That’s exactly what Eduardo Engler was looking for. He had the procedure in 2005 and remained in the Kirkland area for follow-up care from Dr. Rodrigues’ experienced staff, lead by nurse practitioner Mary Hall. “Proper monitoring is critical to the optimal
short- and long-term success of the procedure,” Dr. Rodrigues stresses.“There can be issues afterward, and we need to be there to adjust medications and offer reassurance – and often hold their hands.”

Once Engler returned home to his ranch in Osorno, Chile, Dr. Rodrigues remained in touch with him and his Chilean physicians via e-mail, continuing to guide his aftercare. Engler experienced no further episodes, and he returned to the cockpit. Dr. Rodrigues has now performed well over 100 left atrial ablations. His program is one of the most experienced in the state and shows long- term success with atrial fibrillation patients. He routinely sees patients from around the state.

“I’M JUST HUMBLED.”
In spring 2008, Eduardo Engler returned to Kirkland – this time to thank Dr. Rodrigues personally for the surgical expertise that gave him back his active lifestyle. “It changed my life,” the now 62-yearold Engler told him with a grateful smile. How did that make Dr. Rodrigues feel? “I’m just humbled,” he said, and then recalled the first time they met. “I thought, ‘my goodness… you really have to help this man because he’s come all this way. We are going to find a solution for him.’

Overlake Hospital: Report to the Community – 2004 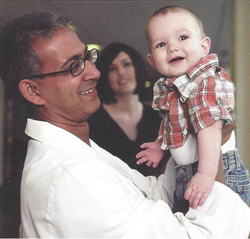 In the fourth month of Sandra Lemon’s pregnancy, she became alarmed by her racing heart, going three times as fast as normal.  “My biggest concern was that everything turn out well for my baby.,” recalls Sandra in a soft North Carolina accent.

Sandra was living with focal atrial tachycardia.  Treatments in college had not entirely cured her, but she had been told it was safe to have a child.

Now with herself and her baby at risk, Sandra’s problem could not wait.  Using the latest technology at Overlake’s electrophysiology lab, cardiologist Derek Rodrigues, MD, utilized special catheters and inserted them into an artery, using thermal energy to “ablate” or burn away the heart muscle tissue causing the problem.

Because she was pregnant, the baby was also at risk from X-ray radiation, so the medical team devised an ingenious solution: while a lead wrap shielded her abdomen externally, the baby was protected internally too, by a barium solution that coated Sandra’s stomach.

After a long procedure, the ablation fully fixed her heart.  “The procedure saved my life.  It saved my family’s life,” she says, as her son Jeffrey plays quietly on husband Dan’s lab.  “It’s hard to put into words how grateful we are.”

The Overlake electrophysiology team that literally warmed her heart produced a joyous outcome.  “Jeff’s my miracle child,” she says.  “And it’s a comfort to know I can have more children without a problem.

“Here I am at The Great Barrier Reef having a great time scubadiving.
Ticker running smoothly, thanks to you!”

“The procedure… saved my family’s life.”

“Thank you for many years of service and care it’s brought me to my
96th birthday next week!”

“For lack of a better wording, thank you for all you have done for me
and my family. You’ll probably never know the total impact of your
care on our lives.”

“As of today we have 15 grandchildren… Believe it or not, you played
a major role in my health so I can continue to be a part of their
lives.”

“We first met in the ER, over 20 years ago while I was having a heart
attack, I was totally at peace because of you.”

“The confidence and caring you give to your patient is remarkable.”